Long-believed to be a truly “African” disease, occasionally affecting the African neighbourhood in southern Europe (Spain, Portugal, Italy) and -in the seventies- a decade-long incursion into a number of Caribbean islands (and Brasil), ASF embarked on an unprecedented invasion of the (rest of the) world around 2006, with a first introduction reported well outside its usual geographical range in the Caucasus, in Georgia in 2007.

At the time, the ASF new lineage (genotype) II “Georgia 1/2007 strain” had been traced back to strains encountered in Madagascar, Mozambique and Zambia mostly [1].

Ever since, the new Georgia strain has spread throughout western Europe, central and eastern Europe, Eurasia, Russia and eventually and inevitably South-East and East Asia, with the major impact being felt in China, the world’s premier pork producer. Recorded for the first time in China in August 2018, the disease has now spread to all mainland provinces and several million pigs have been culled in an effort to halt its spread. Industry estimates suggest 150–200 million pigs (30% of the Chinese population) had been infected by mid-2019, while some press reports indicate that once under-recording is considered the figure may be as high as 50–70% [2]. 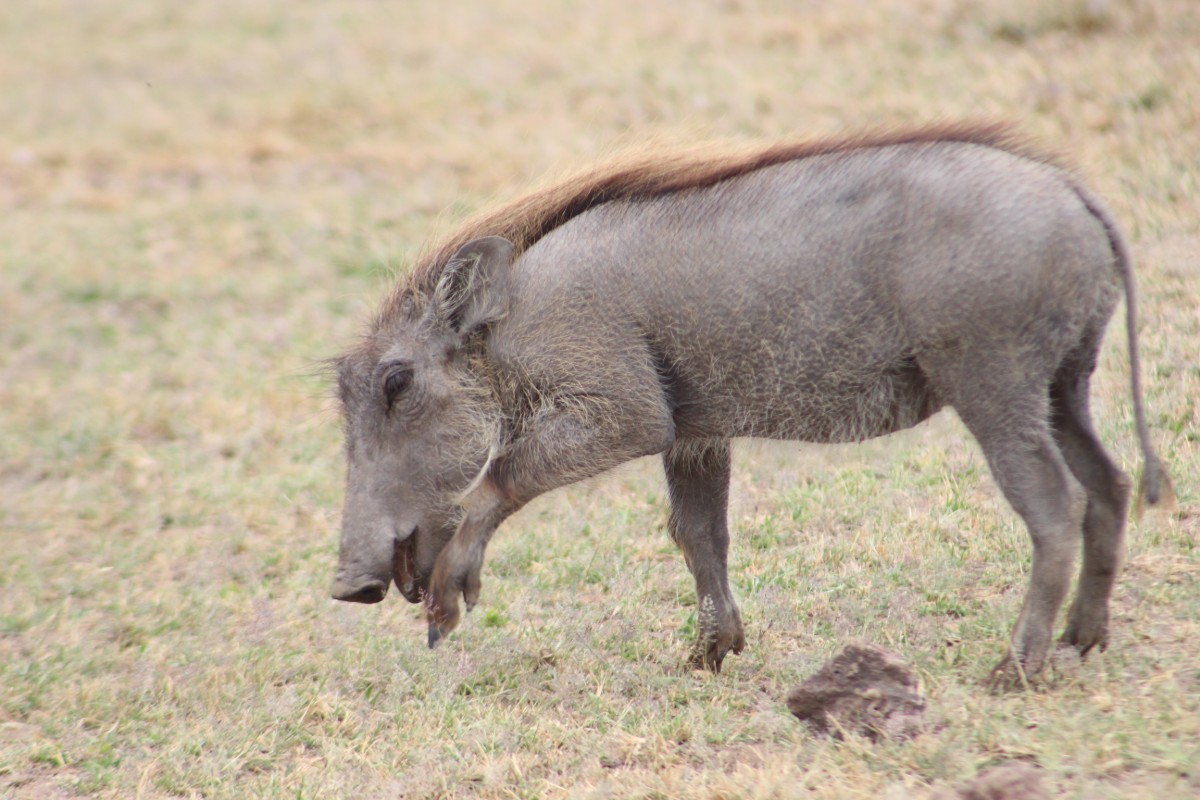 Meanwhile, in Africa, life-with-the-disease went on as usual. Generally regarded as either endemic or frequently, but mildly epizootic and isolated, ASF is deemed a poor candidate for eradication given the absence of a vaccine and the existence of numerous wildlife reservoirs, as elsewhere in the world. Think of warthogs, bush pigs, wild boar,…  Moreover, in parts of eastern, central and southern Africa ASF is also vector-transmitted, i.e. tick borne (Ornithodoros spp.). Where possible, but often impossible to adopt, biosecurity is the word.

WAHIS-based data since its inception in 2005 indicate that “exceptional epidemiological events” related to ASF, i.e. mostly outbreaks, have been reported at a consistent, low rate, until 2017 – 2018, when the number of such “immediate notifications” started to increase, pointing to a higher number of outbreaks of an epizootic nature, either in new territories, i.e. within countries or introduced into hitherto free countries. 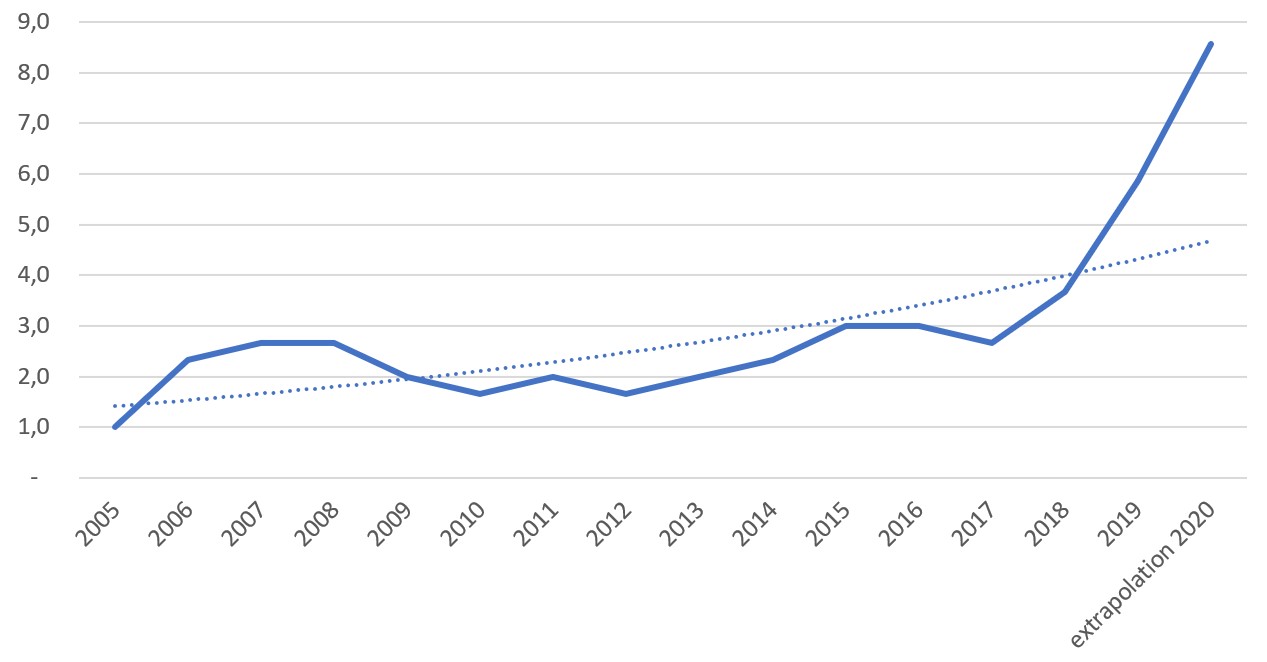 Over the years, 43 outbreaks warranting an immediate notification have been reported to the OIE by:

Numbers between brackets indicate the number of immediate notifications submitted if higher than 1. 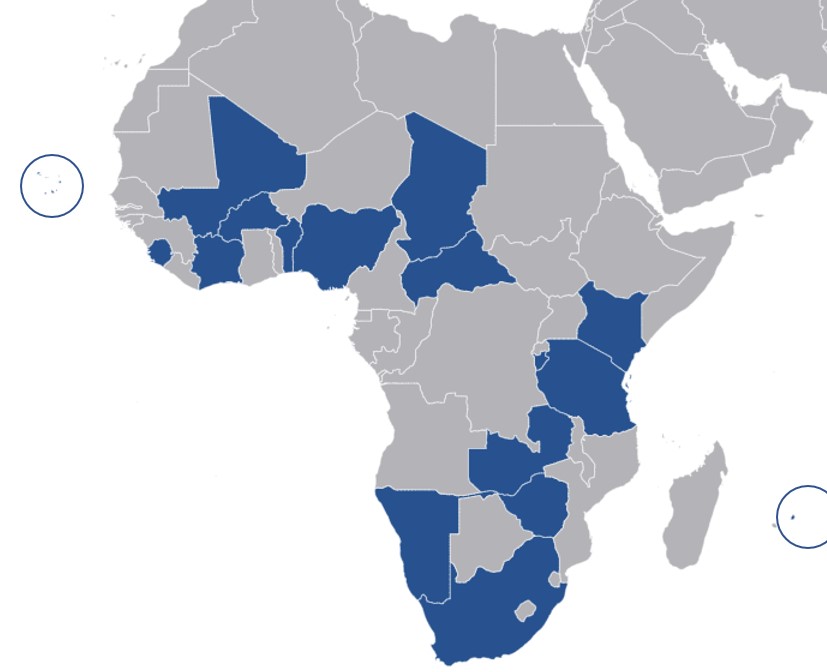 Map of countries reporting ASF  through immediate notifications to the OIE (WAHIS) since 2005. Circled are Cabo Verde (west) and Mauritius (east).

This year alone, by August 8th, 5 countries have reported ASF by means of immediate notifications : Sierra Leone, South Africa, Namibia, Nigeria and Zambia. If the trend for 2020 persists, 2020 will have the highest number of outbreaks on record, in Africa, since 2005 when WAHIS was launched.

Whilst WAHIS data may not readily explain the motivation behind reporting one or several outbreaks to the OIE, the trend is unmistakeably upwards, even in countries where ASF is regarded endemic, common and is usually not reported, unless through six-monthly reports.

Over the past 15 years, 86% of immediate notification were justified – as per OIE regulations – as recurrences of a listed disease, previously reported to the OIE and 12% as a first occurrence. 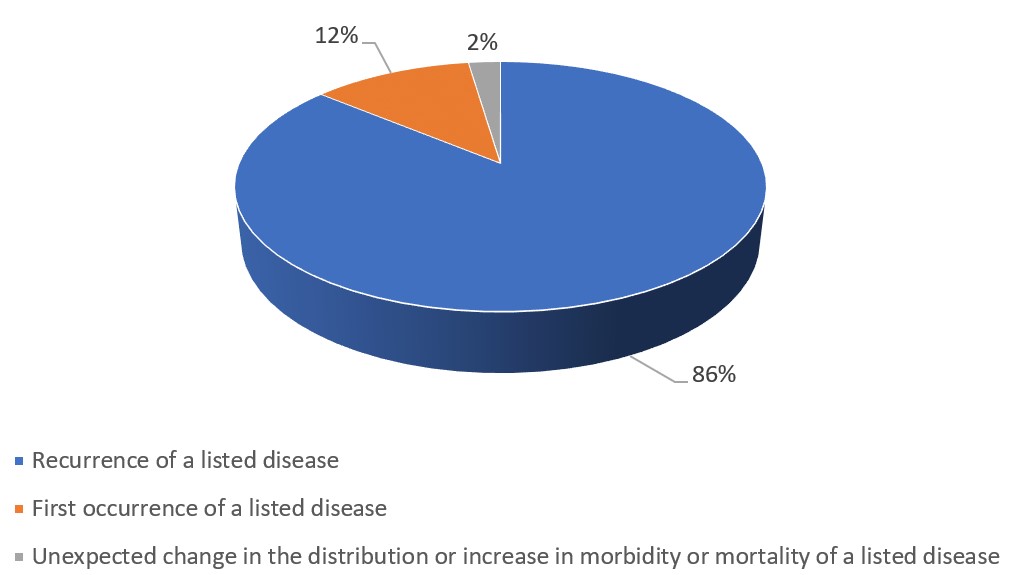 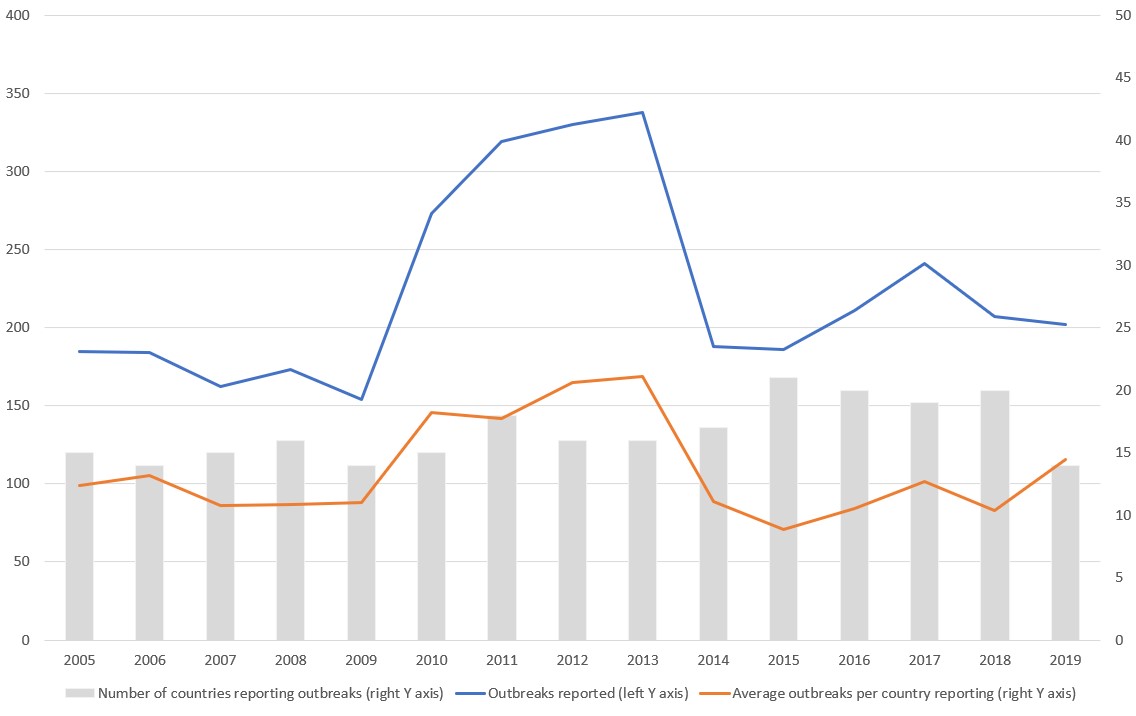 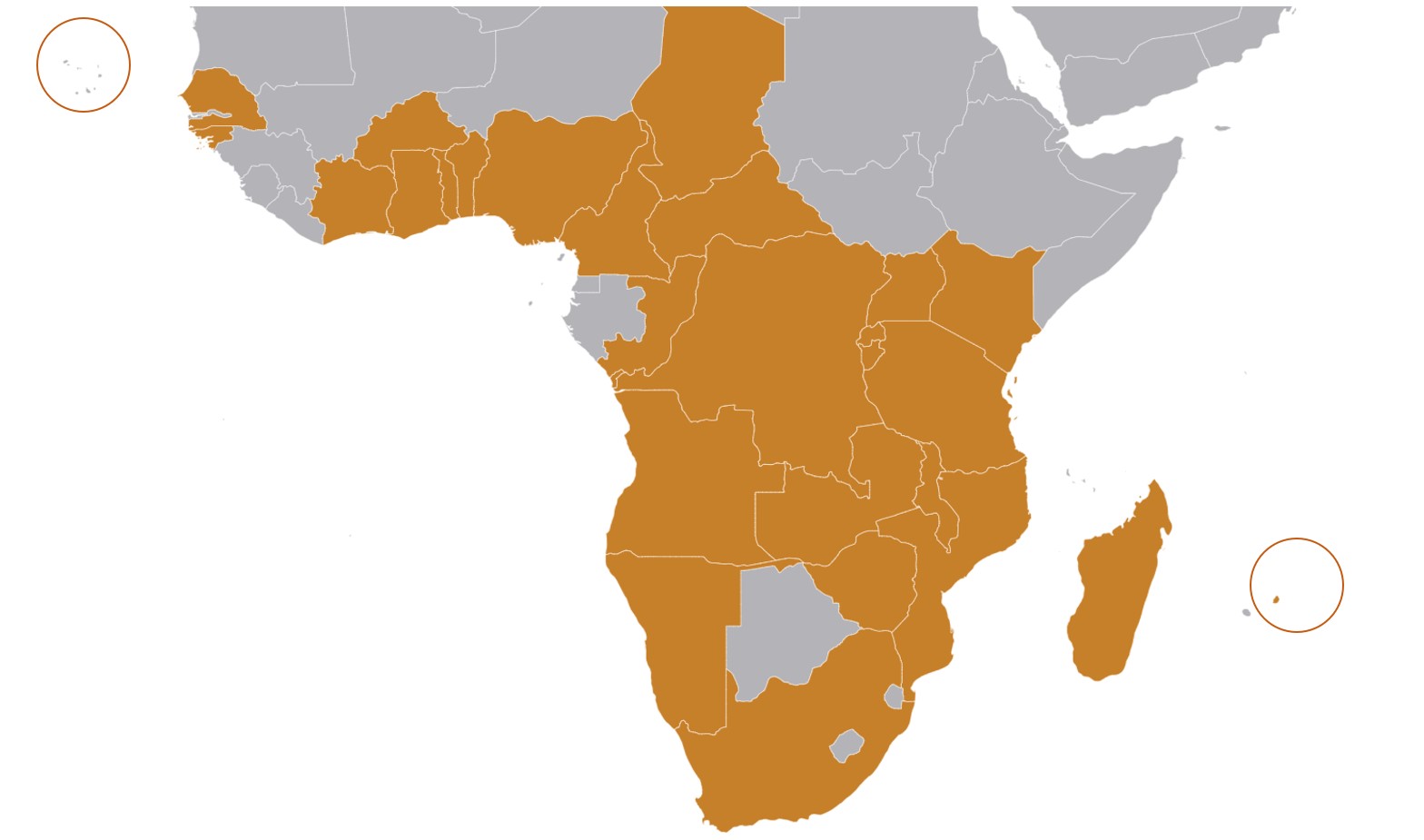 Map of countries reporting ASF  through six-monthly reports to the OIE (WAHIS) since 2005. Circled are Cabo Verde (west) and Mauritius (east).

So is ASF on its way home after a successful world tour ? Is the increase in highly lethal ASF outbreaks an indication that African pigs or -at least- acclimatised domestic pig species are having a hard time when confronted with the Georgia strain, pointing to renewed introductions of the virus from outside Africa ? For one, WAHIS data do not seem to indicate a change in case fatality rates, due to a more virulent virus strain, the case fatality rate in most reported notifications (58%) since 2006 already being higher than 95%.

Also genotype II, linked to the Georgia strain, in a 2018 Africa review by Penrith et al. [3] is still only being reported in the initial countries-of-origin, i.e. Madagascar, Mozambique, Tanzania, Zambia, Zimbabwe, along with Mauritius (2007 – 2008 outbreaks).

In essence, if ASF outbreaks reported to WAHIS are merely the tip of the iceberg, then maybe the iceberg just got bigger.

A much simpler explanation – but speculative given the absence of trustworthy and/or updated census data – is an increase in smallholder farming of pigs across the continent. WAHIS population data for (most of) the countries that reported ASF over the years indicate an average 4.5% annual increase in ‘suids’, with exceptionally high growth (in absolute numbers and percentage-wise) in countries such as Chad, Malawi and Senegal (upward from 500% over a ten-year period 2007/2008 – 2017/2018).

In essence, if ASF outbreaks reported to WAHIS are merely the tip of the iceberg, then maybe the iceberg just got bigger. 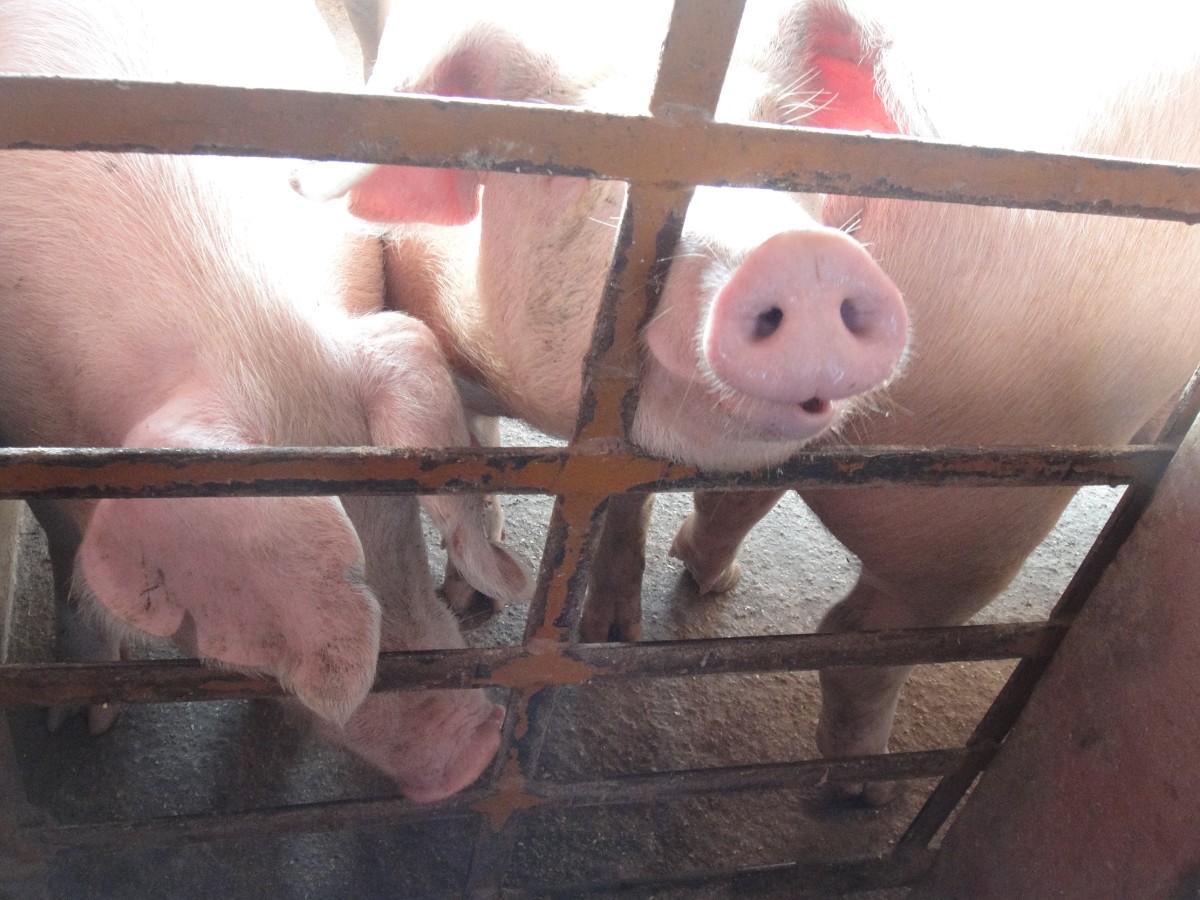 Recent publications on ASF in Africa